Thanksgiving is over and the countdown to Christmas has officially begun (at least in my house). I don't limit myself to just reading cheesy Christmas romances during this time of year. Oh no. I also find myself binge watching Christmas movies on Netflix and the Hallmark Channel. And I thought, why not incorporate that into my blog as well. So I give you the 31 Days of Christmas (which will be much easier to accomplish with movies than books like I've tried to do in past years).

Next up is Sleigh Bells Ring. 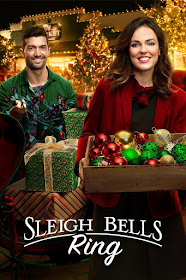 
A busy single mother (Erin Cahill) begins organizing her city's Christmas parade. While prop hunting, she finds a beautiful sleigh that seems to have a mind of its own, and it begins nudging her back to an old flame (David Alpay).


When Laurel's boss tells her she has two weeks to organize the town's Christmas parade, and starts laying out his personal expectations, she finds herself scrambling to fit everything in and still give her daughter, Scarlett a great Christmas too. With a few twists of fate and the aid of a jolly looking old man and his antique sled, Laurel soon finds herself face to face with Alex, her high school sweetheart who left town to move to New York after college.

Laurel is a very stubborn woman who wants to believe she can do everything herself without asking for help, especially from wood working expert Alex. But the antique sled has a tendency to disappear, at least until Laurel admits that she could use Alex's help with the restoration, it's almost like magic.

This second-chance romance features a woman who's just not quite ready to put herself out there again, especially with the man who broke her heart the first time, knowing that he's heading back to the city after the holidays. But I couldn't help hoping that he'd see the extreme error of his ways and take over his aunt's antique store to stay in town.

This movie includes a last minute Christmas parade, a Santa figure, and some surprise home decorating.

This is a movie that I would definitely not actively seek out. It's a good movie, but overall it just feels more sad than happy, and that's not what I'm usually going for at this time of year.

Check Out My Other Christmas Movie Reviews

Just Another Girl and Her Books at 3:35 PM
Share