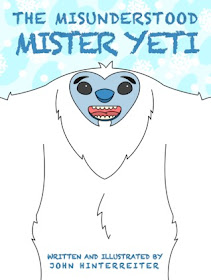 There was an abominable snowman who was gravely misunderstood. His name was Mister a Yeti and his heart was filled with good. Meet Mister Yeti. He's a caring and gentle creature who looks like a scary beast. He only wished others could see his heart or feel his kindness in the least. In "The Misunderstood Mister Yeti," this abominable snowman searches for friendship but realizes that due to his fearsome looks friends are very hard to find. Mister Yeti's story will captivate kids, and adults who are kids at heart, with clever rhymes, vibrant pictures, and a woven message of accepting and respecting the differences in others. 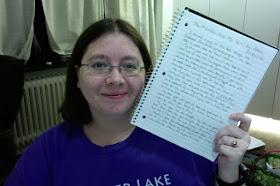 I received a copy of this book through the Goodreads First Reads giveaway program in the hopes that I would leave an honest review.

My seven year old read most of this book to me, I took over for the last few pages. There were several words he stumbled over the pronunciations of, which slowed his reading down some. Basically, if you have a weaker reader like I do, they will struggle some with this book, but it provides room for learning.

The illustrations in this book made me think of Southpark for some reason and I'm really not sure why. They were clear and precise, and very blue and white, but that's to be expected for a story of this nature. The story was cute, but the cadence and rhymes were a little hard to find at times.

My seven year old said the book was good and he liked when the yeti found his friend. He didn't like when the yeti didn't have a friend.

My four year old also thought the book was good and liked when the yeti brought the man to the town and didn't like when he was stuck in the snow. She has also made me read this book to her three nights in a row before bedtime.

Overall I give The Misunderstood Mister Yeti 4.5 out of 5 stars because my kids liked it, but I had issues with the cadence and rhymes at times. - Katie

Working full time as a police officer the author, John Hinterreiter, often seeks outside opportunities to unleash his creativity. John has written and illustrated two children's books, Hugs For Bugs and The Misunderstood Mister Yeti, each of which displays his rhyming and rhythmic storytelling style. John and his wife Keri are living the dream in colorful Colorado.

Just Another Girl and Her Books at 7:27 PM
Share