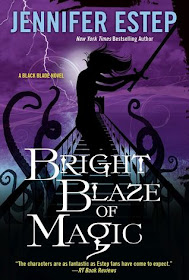 Bad Things Always Come In Threes…As a thief, I'm good at three things: hiding in the shadows, getting in and out unseen, and uncovering secrets. I put these skills to work for the Sinclair Family, one of the magical mobs that run the tourist town of Cloudburst Falls. Everyone knows Victor Draconi wants to take over all the other Families--and kill every last Sinclair. What they don't know is that I'm on to him, and no way will I let the man who murdered my mom get away with hurting all the other people I care about. Especially when I've got places to break into, stuff to steal, and Devon Sinclair fighting right by my side… 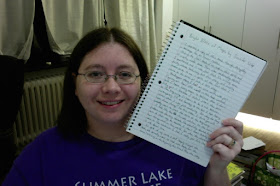 I received a copy of this book through Netgalley in exchange for an honest review.

This is the first book I've read in this series (it's book #3) and it mostly made sense. There were occasionally details I questioned, and it was clear that I'm missing some pretty intense backstory, but this story still mostly made sense to me in spite of the fact that I came to the series at such a late stage.

The biggest thing I had an issue with, was just figuring out how the world in this book worked, and I have every reason to believe that I don't fully get it because I didn't start this series at the beginning. It seems to be a mix between contemporary YA and fantasy (and since I actually check the genre when creating blog posts, I realize that's exactly what it is), but I kept having issues where I was just wondering "But why do they have those things?" For this reason, I think you will probably want to start the series at the beginning (or at least be aware that the book is urban fantasy.)

While reading, I felt like the ultimate solution to the main problem was very obvious, like painfully obvious, but some of that may be because I don't know exactly how things work in this world. But when the characters came to the conclusion that I had, I really just felt like it was about time, with very little sense of vindication.

In spite of my issues, I still largely enjoyed the book, and actually want to read more books from the series (starting at the beginning this time).

Overall I give Bright Blaze of Magic 3.5 out of 5 stars. - Katie

New York Times bestselling author Jen­nifer Estep is constantly prowling the streets of her imagination in search of her next fantasy idea.  Jennifer is the author of the Black Blade and Mythos Academy young adult urban fantasy series for Kensington. She writes the Elemental Assassin urban fantasy series for Pocket Books and is also the author of the Bigtime paranormal romance series.  Jennifer is a member of Romance Writers of America, Science Fiction and Fantasy Writers of America, and other writing groups. Jennifer's books have been featured in Cosmopolitan, Entertainment Weekly, Southern Living, and a variety of other publications. To learn more about her, visit www.jenniferestep.com. You can also sign up for Jennifer's fan page on Facebook and follow her on Twitter and Goodreads.

Just Another Girl and Her Books at 8:13 PM
Share