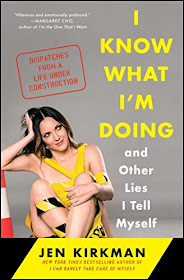 New York Times bestselling author and stand-up comedian Jen Kirkman delivers a hilarious, candid memoir about marriage, divorce, sex, turning forty, and still not quite having life figured out.Jen Kirkman wants to be the voice in your head that says, Hey, you’re okay. Even if you sometimes think you aren’t! And especially if other people try to tell you you’re not.In I Know What I’m Doing—and Other Lies I Tell Myself, Jen offers up all the gory details of a life permanently in progress. She reassures you that it’s okay to not have life completely figured out, even when you reach middle age (and find your first gray pubic hair!). She talks about making unusual or unpopular life decisions (such as cultivating a “friend with benefits” or not going home for the holidays) because you don’t necessarily want for yourself what everyone else seems to think you should. It’s about renting when everyone says you should own, dating around when everyone thinks you should settle down, and traveling alone when everyone pities you for going to Paris without a man.From marriage to divorce and sex to mental health, I Know What I’m Doing—and Other Lies I Tell Myself is about embracing the fact that life is a bit of a sh*t show and it’s definitely more than okay to stay true to yourself.

I listened to the audiobook version of this, and highly recommend it. In fact, I would recommend doing it with a glass of wine (or your libation of choice), because it's a lot like listening to a girlfriend  gossip, which is great if you're an involuntary hermit like me. It's almost like having someone there chatting with you, except you don't get to say anything in return (in other words, you're not expected to provide any input or anything! So it's basically awesome).

This book is chock full of questionable advice for adults. But it's told in such a way, that I kind of want to try it all. Jen's ride may have been bumpy, but it sure sounds fun. I think the most important aspect of this book though, is that Jen doesn't act like she has all the answers...or any of the answers. Really, the ultimate takeaway for me was essentially "You do you, boo" because the choices we make in life may not seem like the right choices to outsiders, but they're not the ones who have to live with the consequences. And even if we don't always like the consequences of our actions, we can learn from the experience and be better for it.

Overall I give I Know What I'm Doing and Other Lies I Tell Myself 4.698 stars. - Katie

Jen Kirkman is a world-touring stand-up comedian and the author of the New York Times bestseller I Can Barely Take Care of Myself: Tales of a Happy Life Without Kids and I Know What I’m Doing—And Other Lies I Tell Myself: Dispatches from a Life Under Construction. Her Netflix original comedy special I'm Gonna Die Alone and I Feel Fine streams worldwide, and she has released two comedy albums, Self Help and Hail to the Freaks (which hit #13 on the Billboard charts). She was a longtime writer and panelist on the E! Network’s Chelsea Lately and the narrator of many episodes in the award-winning TV show Drunk History on Comedy Central.

Just Another Girl and Her Books at 1:30 PM
Share