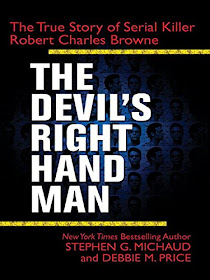 From a New York Times bestselling author and an award- winning journalist comes the gripping true story of a cold-blooded killer. In 2000, Robert Charles Browne wrote a letter from his prison cell in Colorado, where he was serving a life sentence for the murder of a young girl. "The score is you one, the other team 48," wrote Browne. "Seven sacred virgins entombed side by side, those less worthy are scattered wide." No one in local law enforcement knew what to make of this message, nor could they guess the bizarre murder saga about to land in their laps. Then in 2002, three retirees formed their own cold case squad-and wound up tracing Browne's tantalizing and enigmatic clues to unsolved murders in six states. This is the gripping, powerful true story of a cold-blooded killer-and the tireless investigators who defied all odds to uncover his chilling truth.

This book got off to a slow start for me. There was a whole lot of background information about the police officers and civilians that undertook the investigation into Robert Browne's past deeds, and while I understand that knowing their background can be important, I was expecting the book to be more about Browne, and it just wasn't. I mean, the tagline says that this is "the true story of serial killer Robert Browne" after all, so I don't think my expectations were unreasonable. It wasn't until about halfway through the book that things started to really move along for me, and that's about the same time when I started learning more about the things that Browne claims to have done.

This book really made me think about some of the very questionable choices that I made in my youth. While Browne very clearly preyed on vulnerable women, many of whom were not on the "right" path in life, it's not a stretch to see myself in many of their shoes. Even my husband could have been a Robert Browne, no better than I knew him when I took him home for the first time.

Considering all the time spent discussing them, I get the impression that the authors of this book were much more fascinated by the investigators and the cold case squad that started looking into Browne's claims. Either that, or they just didn't have enough information about Browne to fill a whole book, and therefore needed filler to meet contract obligations, which doesn't make for a good book. (Seriously, it's a questionable tactic for a research paper for school; it's downright asinine for a book that you expect people to pay for.).

Overall I give The Devil's Right-Hand Man 2.8974 stars, because while I was ultimately intrigued by some aspects of the story, the book in general was quite the letdown. - Katie

Stephen G. Michaud is the New York Times bestselling author and co-author of more than a dozen true crime books. Debbie M. Price is an award-winning journalist whose work has appeared in numerous publications.

Just Another Girl and Her Books at 8:43 AM
Share