*Review* Children of the Fifth Sun: Echelon by Gareth Worthington 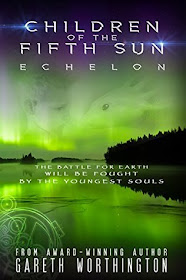 ***SEQUEL TO THE AWARD-WINNING CHILDREN OF THE FIFTH SUN*** THE BATTLE FOR EARTH WILL BE FOUGHT BY THE YOUNGEST SOULS Fifteen thousand years ago, the knowledge bringers—an amphibious, non-humanoid species known as the Huahuqui—came after a great global flood, gifting humans with math, science and civility. We killed them all. Seventy years ago, we found one of their corpses preserved in ice and eventually created a clone, named K’in. Our governments squabbled over the creature and we killed that, too. Now, a sinkhole in Siberia has opened revealing new secrets and humans may once again have a chance to prove we deserve the gifts the Huahuqui bestowed. *** Freya Nilsson has spent the last five years trying to forget her role in the Huahuqui cloning program. Instead, she hid her son, KJ, from the regimes and agencies who she believed would exploit him for the powers he acquired through his father’s bond with K’in. An innocent trip to help KJ understand his abilities results in the global conspiracy she fought to bury exploding back to life. Chased by new foes, and hounded to put the needs of the world first, all Freya can think of is protecting KJ—at all costs.

I was hired to proofread this book. The only aspects of the story that I influenced were the spelling and grammar. If you feel that my connection to this book makes my review untrustworthy, so be it, but this is my honest review.

This is the second book in a series and I have not read the first. That being said, I didn't ever feel like I was completely lost while reading because this story does a pretty good job of reiterating the key points from the first book to bring new readers up to speed. I mean, you should still probably read Children of the Fifth Sun first, but even if you don't, you shouldn't feel completely lost during this story.

This book was rather action-packed, and since it heavily focused on children, that really concerned me. The mother in me was pretty much not okay with the kids' lives being at risk, although the optimist in me was holding out hope that the Huahuqui would protect them from everything. I was just really anxious to see everything turn out okay.

And now I'm really curious to see where this story will go from here, because it is part of a series and it's very obvious that there is more to come and I just can't wait to get my hands on the next book.

Gareth holds a degree in marine biology, a PhD in Endocrinology, and currently educates the World's doctors on new cancer therapies for the pharmaceutical industry. He has hand-tagged sharks in California; and trained in various martial arts, including Jeet Kune Do, Muay Thai, and MMA at the EVOLVE MMA gym in Singapore and Phoenix KampfSport Switzerland. As an author, he is represented by Renee C. Fountain and Italia Gandolfo of Gandolfo-Helin-Fountain Literary Management. His debut novel, Children of the Fifth Sun, won the Sci Fi category at the London Book Festival 2017 and has been optioned by Vesuvian Entertainment for TV/Film. His second novel, It Takes Death to Reach a Star co-authored with Stu Jones, will be published by Vesuvian Books in 2018 and has optioned by Vesuvian Entertainment for TV/Film. Book two in both series is forthcoming.Born in Plymouth UK, he currently reside outside of Zurich, Switzerlandwww.garethworthington.comwww.facebook.com/garethworthingtonauthor/www.ittakesdeathtoreachastar.comwww.childrenofthefifthsun.com

Just Another Girl and Her Books at 7:50 AM
Share