Why I Should Boycott Goodreads Giveaways (But Probably Won't)

A couple weeks ago Goodreads announced some changes they are making to their giveaway program starting in January. I first found out about it on Facebook when I saw a post written by Clarissa Wild about the changes. You can read her original post by clicking on her name. A little bit later in the day (or maybe the next day) I also found a link to the post about the changes on Goodreads (while surfing Facebook). You can see what Goodreads has to say about their program changes here. While the Goodreads post goes a bit more in-depth into the changes, the basic facts between the two posts are the same. And that got me thinking.

If you've been following my blog with any regularity at all, you're probably aware that I'm a Goodreads Giveaway addict. I have a monthly mail call post dedicated to the physical books that I win on Goodreads (and it's pretty extensive every month). I love entering giveaways and I love winning things, especially when those things are awesome free books. But these changes from Goodreads have me conflicted.

For starters, do they really affect me as a reader? No, except yes. I know for a fact that Ms. Wild is right that indie authors will not be able to host giveaways anymore, or at least they won't be able to host many giveaways any more. The cost that Goodreads is instituting just to host a giveaway is exorbitant, and I can't even see a real good reason for it. I definitely don't see a reason why authors would want to pay it with the new restrictions in place too (I'll discuss that more in depth in a bit). So fewer indie authors hosting giveaways equals fewer books to be won, which will result in me winning fewer books (it's a numbers game, the more giveaways I can enter, the more giveaways I will win...fewer giveaways will result in fewer wins, so that's how this will affect me as a reader).

So now I'd like to discuss some of the things Goodreads is offering as the reasoning behind charging for giveaways. First, they say that giveaways boost exposure for books. True. I've learned about way more books by entering the Goodreads giveaways than I ever would have without them. But I've only bought about a handful of books that I first saw through giveaways that I didn't win (probably, I don't know for sure because I do have a one-click addiction too, and I can't always remember where I first heard about a book). But there's more! Starting January 9th, when a person enters a giveaway for a book on Goodreads, that book will automatically be added to their to-read shelf and by extension their Goodreads newsfeed. Except, that's not entirely new. 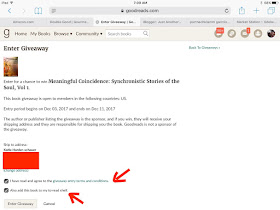 As you can see in this screenshot I took while entering giveaways a week ago (when I first started thinking about this blog post), there is an option for me to add this particular book to my to-read shelf. I have been adding every book I enter for a chance to win to my to-read shelf for the past four years. I'm sure there are some entrants that don't do that, but there are also definitely some that do. But I enter all the giveaways, so my personal Goodreads newsfeed is inundated with loads of books, and I bet most of my friends on Goodreads (except Suanne Laqueur) just scroll past them, which means me adding the books to my TBR shelf doesn't really have any impact on the book's exposure in the first place. 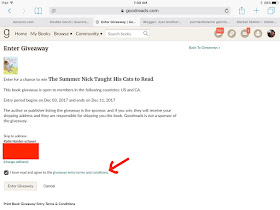 But not all giveaways currently offer you the option to add the book to your TBR shelf when entering (as shown by the above screenshot). I'm pretty sure those books are already added to my TBR shelf right now, which means this proposed change by Goodreads isn't much of a change to begin with. This will just now be the default for all giveaways. Which means there is one less box for me to make sure I've checked (but that box came pre-checked anyway).

But the big change Goodreads is making on January 9th, that is not good for pretty much anyone involved, is that giveaways will now only be open to people with a US mailing address. That wouldn't affect me even if we weren't moving back stateside because I have a US mailing address here due to my husband's job, and most giveaways are already only open for US and maybe Canada by the choice of the giveaway host. Honestly, the only reason to have a US only restriction is for Kindle book giveaways and that would be easy enough to do on it's own while still allowing authors and publishers the option to giveaway books in other countries. If an author or publisher wants to pay to ship a book internationally, Goodreads should let them.


So all of this makes me feel for authors. I'm outraged on their behalf even though it really won't affect me personally much at all, because while some people don't think the Big 5 will pay to host giveaways on Goodreads, I personally imagine they'll just start factoring those costs into the overall publicity costs for new releases. They may offer fewer copies, or they may switch to offering Kindle copies which they won't have to pay to produce and ship, but I don't see this affecting the number of Big 5 sponsored giveaways. No, the only authors this really hurts are the indies and authors signed by small presses. So how do we get Goodreads to change their policy? Boycott, either from giveaway sponsors or from readers. It will be more effective if the readers do the boycotting though, because if even just one person hosts a giveaway ever starting January 9th, Goodreads has made more money on giveaways for that one giveaway than they have in the entire history of the program. They really have no reason to care. That means it's really up to the readers to get Goodreads to change, and that's why I'm pretty sure change will not happen.

Because like I already said in the title of this post, I probably won't boycott the Goodreads giveaways, and I'm certainly not going to abandon the site altogether. I love how I can track my reading through the yearly reading challenge, and as far as I know, there isn't another site out there that provides that service (if you know of one, be sure to tell me about it in the comments). And if I'm not prepared to commit to a boycott in protest, how many other giveaway entrants won't be either?

So why won't I boycott the Goodreads giveaways starting January 9th? Partially because I'm a bit greedy where books aren't concerned and I want to win all the books so I can read all the books. But also partially because I want to see how the program changes when Goodreads starts charging authors and publishers to use it. And I've been aggressively entering Goodreads giveaways for four years now (basically entering every giveaway available for books written in English, and sometimes in other languages when I'm not paying enough attention of intrigued by the prospect). Beyond that, I've been keeping photo albums of my Goodreads wins on Facebook for two of those four years, so I know that I win more than 1 book per day on average (I'm nearing 400 books won for 2017 right now). If there is anyone in a position to talk about the changes from a reader's perspective, I'm probably it (or at least one of the somebodies that could do it). And maybe I'm just trying to rationalize my desire to keep entering the giveaways. I want to examine the changes because it gives me an excuse to keep entering when I know, deep down, that I should abandon the giveaways to show support for indie authors.

So that's what's going on, and now that I've gotten my two cents in, I want to know what you think about these changes. And I'd love to know if you're reacting as an author or reader, but if you're not comfortable  divulging that, I understand. - Katie
Just Another Girl and Her Books at 10:59 AM
Share