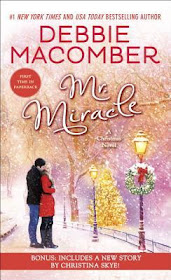 Beloved #1 New York Times bestselling author Debbie Macomber celebrates the most wonderful time of the year in this heartwarming Christmas novel of romance, hope, and the comforts of home—coming soon as a Hallmark Channel original movie!Harry Mills is a guardian angel on a mission: help twenty-four-year-old Addie Folsom get her life back on track—and, if the right moment strikes, help her find love. Posing as a teacher at a local college in Tacoma, Washington, Harry is up to the task, but not even he can predict the surprises that lay in store.After trying to make it on her own, Addie has returned home to Tacoma for the holidays, but this time she plans to stay for good, enrolling in the local community college to earn her degree. What she doesn’t plan to do is run into Erich Simmons.Addie and her next-door neighbor, Erich, are like night and day. Growing up, he was popular and outgoing while she was rebellious and headstrong, and he never missed an opportunity to tease her. Now she intends to avoid him entirely, yet when they’re suddenly forced to spend Christmas together, Addie braces for trouble.Perhaps it’s the spirit of the season or the magic of mistletoe, but Addie and Erich soon find they have more in common than they thought—and that two people who seem so wrong for each other may actually be just right. With a little prompting from a certain angelic teacher, the two are in for a holiday miracle they’ll never forget.


Thanksgiving is over which means I'm ready to read all the Christmas books. This is the time of year when I start to crave all things cheesy; feel-good romances that just lift your spirits whether you want them to or not. I had such high hopes for my first holiday book of the season, Mr. Miracle. Sadly, it did not live up to my expectations.

For starters, based on the synopsis, I was expecting Addie and Erich to be the focus of the story, but I really felt like there was more focus on Harry's life on Earth than Addie and Erich's relationship. And about their relationship, with this being a holiday romance, I knew insta-love was going to play into the story, but I didn't really feel it with them. Sure, they started spending a lot of time kissing, but they went from hating each others guts to "I've fallen deeply in love with you" in a matter of days, but we didn't get to really see what led to that. The few interactions between them we were treated to in the story just didn't do enough to lead up to that for me. It could have, if the story would have focused on them and their interactions, maybe, but it just didn't.

Beyond that, I had a hard time suspending belief for some of the events in the story. To start with, Erich was so dependent on Addie because he got in a car accident and broke both of his wrists. So I get that this would make bathing, cooking, and eating difficult. I have a hard time accepting that he would be as helpless as he's portrayed in the book though. There was one scene where he literally fell down and could not get up, because his wrists are broken. I am fat and out of shape and I can get up from laying flat on my back on the ground with almost no trouble. And the scene of her trying to help him get up is like THE pivotal moment in their relationship. The whole situation was just too absurd. Give the guy a broken leg and one broken wrist, and it would all have been more believable. And I was just so annoyed by this absurdity that I couldn't really enjoy the rest of the story.

Debbie Macomber, the author of Love Letters, Mr. Miracle, Blossom Street Brides,and Rose Harbor in Bloom, is a leading voice in women’s fiction. Nine of her novels have hit #1 on the New York Times bestseller lists, and three of her beloved Christmas novels have been  hit movies on the Hallmark Channel, including Mrs. Miracle and Mr. Miracle. In 2013, Hallmark Channel began production on the original series Debbie Macomber’s Cedar Cove, based on Macomber’s Cedar Cove books. She has more than 170 million copies of her books in print worldwide.

Just Another Girl and Her Books at 3:46 PM
Share