I have spent a few years in a couple of different book clubs now, and I've led my fair share of discussions (so every time it was my turn in the rotation to pick a book basically, although I've been slacking a little in my current book club). I can't tell you how many times I've finished a book that I'd chosen for our meeting, only to realize that I couldn't think of a single question to ask (and I'd forgotten to consider that while reading). In those instances I would run to the interwebs to search for discussion questions, just hoping that someone else had been kind enough to think of questions and share them with the world. I had about a 50% success rate with that.

As a mother myself, A House for Happy Mothers gave me a lot to think about where motherhood is concerned, and it didn't take me long to think of several questions that could be used in a discussion of this book if I can talk my book club into reading it. I figured I might as well share my questions with y'all as well though, in case you need a little help coming up with things to ask at your next book club meeting. If you have not read the book yet, stop reading now as the questions absolutely involve spoilers.

You can read my review of A House for Happy Mothers here. 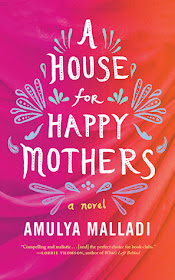 1. Would you consider being a surrogate if you were in Asha's shoes?

2. Do you think Asha would have agreed to being a surrogate if her parents were white like some of the other mother's at the House for Happy Mothers?

3. Near the end of her pregnancy, Asha thinks about running away with her family and the baby. Do you think she would have even considered running away if the baby was white?

4. For most of the book, Asha does not like Priya. Do you think she dislikes Priya simply because Priya doesn't speak Telugu well?

5. What do you think about Americans and other citizens of first world countries using surrogates in second and third world countries to make it more affordable for them? Do you think it was more acceptable for Priya and Madhu because they are Indian?

6. Do you think Priya and Madhu would use Dr. Swati again after they found out how she was manipulating Asha with promises of a good school for her son?

7. Do you think Asha kept the pearl earrings?

8. While Priya and Sush were staying with Sush's friends, Mona visited the House for Happy Mothers with Priya once. Do you think Mona might have used her connections to get changes made to the way surrogate houses in India were run after that visit?

9. Do you think Asha ever realized that Priya and Madhu actually cared about her well-being too, not just their baby?

10. Do you think Priya and Madhu actually did care about Asha's well-being?

11. Do you think Asha ever contacted Priya and Madhu again?

12. Do you think Asha ever became a surrogate again?

13. Would you ever consider using a surrogate in a poor country after reading this book?


So those are all the questions that I would ask at a book club meeting if we were discussing this book. If you have read the book, are there any other questions you would ask? (If you share a question, do you mind if I add it to my list?) I hope you'll find these questions helpful if you find yourself in a bind before your next book club meeting. - Katie
Just Another Girl and Her Books at 3:09 PM
Share