*Review* The Windfall by Diksha Basu 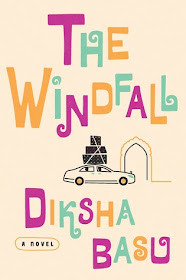 For the past thirty years, Mr. and Mrs. Jha’s lives have been defined by cramped spaces, cut corners, gossipy neighbors, and the small dramas of stolen yoga pants and stale marriages. They thought they’d settled comfortably into their golden years, pleased with their son’s acceptance into an American business school. But then Mr. Jha comes into an enormous and unexpected sum of money, and moves his wife from their housing complex in East Delhi to the super-rich side of town, where he becomes eager to fit in as a man of status: skinny ties, hired guards, shoe-polishing machines, and all.The move sets off a chain of events that rock their neighbors, their marriage, and their son, who is struggling to keep a lid on his romantic dilemmas and slipping grades, and brings unintended consequences, ultimately forcing the Jha family to reckon with what really matters..


I received a copy of this book through Penguin's First to Read program in exchange for an honest review.

I don't know if this is really an accurate portrayal of the behavior of rich Indians (from India, not Native Americans), but I have to assume that it is at least for some. That being said, the characters in this story take keeping up with the Joneses to the extreme. Mr. Jha and Mr. Chopra are actually excited by the prospect of their adult children relying on them completely for financial support because it proves that they're wealthy enough to support them. They both even separately lament that they only have one child to support because people might think that means they're not wealthy enough to support more. I just could not wrap my mind around that concept. It's one thing to want to be able to support your kids if they need a little help to get on their feet; it's quite another to want them to fail at their endeavors. This behavior had me not liking Mr. Jha, Mr. Chopra, and Mrs. Chopra because while she's really only a side character, she very clearly embraces the keeping up with the Joneses her husband is heavily engaged in.

While the main point of this story seemed to be about how the financial windfall from selling the website he created changed the Jha's lives, there were a couple of side stories that made the story more interesting for me. While I was not really fond of Rupak, the Jha's son, his relationships in America where he was attending school were intriguing. I thought he was a punk for not being up front with his parents about Elizabeth, but I also don't really understand the culture that well. What really kept me reading was the story surrounding Mrs. Ray, the Jha's young, widowed neighbor from their old life. She was really the only character in this story that I was really rooting for.

I feel like I may have gotten some insight into Indian culture from reading this book, and there were some things that just left me baffled. I wish I wouldn't have felt like I had to trudge through all the money talk to get to the interesting tidbits in the story, but it is what it is.

Overall I give The Windfall 3 out of 5 stars. - Katie

Diksha Basu is a writer and occasional actor. Originally from New Delhi, India, she holds a BA in Economics from Cornell University and an MFA in Creative Writing from Columbia University and now divides her time between New York City and Mumbai.
SaveSave
Just Another Girl and Her Books at 1:32 PM
Share