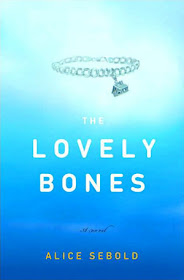 The Lovely Bones is the story of a family devastated by a gruesome murder -- a murder recounted by the teenage victim. Upsetting, you say? Remarkably, first-time novelist Alice Sebold takes this difficult material and delivers a compelling and accomplished exploration of a fractured family's need for peace and closure.The details of the crime are laid out in the first few pages: from her vantage point in heaven, Susie Salmon describes how she was confronted by the murderer one December afternoon on her way home from school. Lured into an underground hiding place, she was raped and killed. But what the reader knows, her family does not. Anxiously, we keep vigil with Susie, aching for her grieving family, desperate for the killer to be found and punished.Sebold creates a heaven that's calm and comforting, a place whose residents can have whatever they enjoyed when they were alive -- and then some. But Susie isn't ready to release her hold on life just yet, and she intensely watches her family and friends as they struggle to cope with a reality in which she is no longer a part. To her great credit, Sebold has shaped one of the most loving and sympathetic fathers in contemporary literature.

I’ve been meaning to read this one for a long time, especially because I really wanted to watch the movie. I’d seen a few of Saoirse Ronan’s other movies, and I liked them enough. The thing that put me off reading this was the content though. It’s not something easy for most people to read, but it’s especially difficult for me.In case you don’t know me I’ll just come out and say it, I was sexually abused as a child. I try to bring myself to read/watch things with this content to help prove I have made it past that in my life. But there are also times that I just can’t. Anyway, I was at a place in my mind where I was able to read this. And so I checked it out from my library. This was really not what I was expecting. I’d heard a lot about it from my friends and random people who were online. But I did not expect it to be anything like it actually was. I don’t even know how to put into words how different this was from expectations. One big thing is that this book is very slow in its development of the crime. Not in the characters or the story going around it, that is always fairly engaging. But the whole story takes place over a long period of time. I don’t want to say the exact amount, but it’s a while. There’s this one scene that is incredibly, I don’t know how to say it other than being straight to the point, dumb. It was so ridiculous and unnecessary. I’m pretty sure I was rolling my eyes during that entire time. And I’m taking down a star because of it. I do want to give some props to Jack Salmon though, he’s Susie’s father. And he’s really the best character in this whole story. 3 Platypires - J. Hooligan

Alice Sebold is the author of three #1 bestselling books, including Lucky, and the novels The Lovely Bones and The Almost Moon. Her work has been translated into more than fifty languages and has appeared in The New York Times and The Guardian, among other publications. She is a member of the National Leadership Council for RAINN.org (Rape, Abuse & Incest National Network). She lives in California.
Just Another Girl and Her Books at 9:50 AM
Share