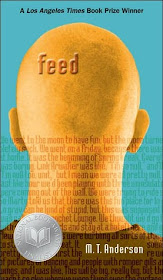 Identity crises, consumerism, and star-crossed teenage love in a futuristic society where people connect to the Internet via feeds implanted in their brains.For Titus and his friends, it started out like any ordinary trip to the moon - a chance to party during spring break and play with some stupid low-grav at the Ricochet Lounge. But that was before the crazy hacker caused all their feeds to malfunction, sending them to the hospital to lie around with nothing inside their heads for days. And it was before Titus met Violet, a beautiful, brainy teenage girl who has decided to fight the feed and its omnipresent ability to categorize human thoughts and desires. Following in the footsteps of George Orwell, Anthony Burgess, and Kurt Vonnegut Jr., M. T. Anderson has created a not-so-brave new world — and a smart, savage satire that has captivated readers with its view of an imagined future that veers unnervingly close to the here and now.

I got this audiobook from the Audiobook Sync summer reading for teenagers program for completely free with no strings attached.

I listened to this audiobook at 1.5 speed, and I think that contributed to my enjoyment of the story. At that speed, everything seemed super fast paced, but I feel like that helped to put me in a frame of mind similar to that of the characters who are constantly being bombarded by information and ads through the feeds implanted in their brains. Additionally, even if it's not the authors intent, I feel like people who live their lives with that type of bombardment would probably talk pretty fast, especially teenagers. So if you opt to go with the audiobook on this, listen to it fast. It'll take a minute to figure out the lingo and stuff, but it's worth it. Also, be warned that the audio includes ads that the characters are exposed to, that sound just like ads you might hear on the radio. It's part of the experience.

The story itself was a rather bleak commentary on society in the possible future. It's not hard to believe that at some point the well-off will line up to get chips implanted in their babies heads which will allow them to instantly access the entire internet with just a thought. Just look at how long some people will wait in line just to get the new iPhone right now, which allows them to access the entire internet with just a few clicks. And the idea that shiny new things might be used to distract the populace from horrible stuff that is happening is not really that far-fetched either. So even though this is very much science fiction, it seems pretty realistic.

Matthew Tobin Anderson (M. T. Anderson), (1968- ) is an author, primarily of picture books for children and novels for young adults. Anderson lives in Cambridge, Massachusetts.His picture books include Handel Who Knew What He Liked; Strange Mr. Satie; The Serpent Came to Gloucester; and Me, All Alone, at the End of the World. He has written such young adult books as Thirsty, Burger Wuss, Feed, The Game of Sunken Places, and Octavian Nothing. For middle grader readers, his novels include Whales on Stilts: M. T. Anderson's Thrilling Tales and its sequel, The Clue of the Linoleum Lederhosen.-Wikipedia
Just Another Girl and Her Books at 1:21 AM
Share