When I was growing up, I loved Mad Libs. The excitement of sort of writing your own story really appealed to me. So I thought it would be fun to mesh that love with my love of books by turning blurbs into mad libs and letting you guys write your own book blurbs.

For anyone that doesn't know how Mad Libs work, I will ask you for certain parts of speech or other specific things (i.e.: date, age, color, etc.) which you will write down. After you have completed your list, scroll down below the cover image to find the redacted blurb. Then read through it substituting your words where applicable. Try not to laugh. (Laughing is actually strongly encouraged, because this is supposed to be funny.)

Some brief definitions of the parts of speech.
Noun: Person, place, or thing.
Verb: Describes or indicates action.
Adverb: Modifies a verb, adjective, or other adverb expressing manner, place, time, or degree (gently, here, now, very).
Adjective: Names an attribute of a noun (pretty, blue, large)
Pronoun: A word that can function as a noun (I, we, they)
Preposition: a word that combines with a noun or pronoun to form a phrase that usually acts as an adverb, adjective, or noun (on, after, for)

And with that, here we go. 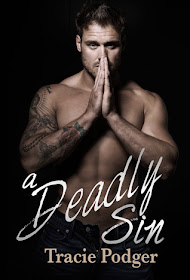 Now that your fun is through, here is the real blurb for A Deadly Sin by Tracie Podger.

There are seven deadly sins, so they say.Pride, Envy, Wrath, Gluttony, Lust, Sloth, and Greed.We are guilty of them all. But what happens when someone decides to become judge, jury, and executioner of those that commit these sins?Detective Mich Curtis is thrown back into a world he thought he’d managed to struggle out of.It started as a simple murder case to solve – it became a fight to survive.Seven sins, seven murders – who will be the last man standing?The executioner or the only person fucked up enough to get inside his mind?

If you enjoyed this mad lib, please leave a comment below with your list (if you dare) so the rest of us can get a chuckle out of it as well. - Katie
Just Another Girl and Her Books at 10:01 PM
Share