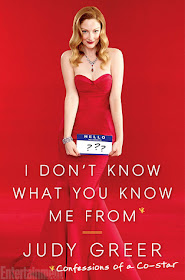 You know Judy Greer, right? Maybe from The Wedding Planner, 13 Going on 30, Carrie, Arrested Development, or The Descendants. Yes, you totally recognize her. And, odds are, you already feel like she’s your friend. In her first book of essays, I Don’t Know What You Know Me From, Greer writes about everything you would hope to hear from your best friend: how a midnight shopping trip to Walgreens can cure all; what it’s like to wake up one day with stepchildren; and how she really feels about fans telling her that she’s prettier in person. Yes, it’s all here—from the hilarious moments to the intimate confessions.But Judy Greer isn’t just a regular friend—she’s a celebrity friend. Want to know which celebs she’s peed next to? Or what the Academy Awards are actually like? Or which hot actor gave her father a Harley-Davidson? Don’t worry; Greer reveals all of that, too. You’ll love her because, besides being laugh-out-loud funny, she makes us genuinely feel like she’s one of us. Because even though she sometimes has a stylist and a makeup artist, she still wears (and hates!) Spanx. Because even after almost twenty years in Hollywood, she still hasn’t figured everything out—except that you should always wash your face before bed. Always.

Judy Greer is one of those actors that is in literally every movie to ever exist. But she always plays a role that’s important and crucial to the movie, but not very memorable. I’ve seen a bunch of her movies, and I recognize her in them all. And I can list you the movies she’s in. But I cannot tell you the name of a single one of her characters. (Although that shouldn’t really mean much coming from me, because I’m horrible at names.)One very important thing to note is that she has the single greatest name of all time. Not including her middle and last name, I mean. And yet she chooses to shorten it with the WORST version of our name. It’s a travesty! Nobody tell my grandmother I said this, because that’s how she shortens her name as well.Reading this did make me appreciate her much more than I already did. She’s made a carrier out of playing the best friend. Which helps make the main character more accessible to the audience. So, basically, we’re all lucky she’s taken these roles. Thanks, Judy!I found her story to be quite entertaining. It wasn’t super exciting, but it was incredibly relatable. Also, I really appreciated how she included her step family. I think it’s important that people recognize that just because a family isn’t blood doesn’t make it less of a family.Before reading this I never paid attention to IMDB ranks. But I totally just checked her profile, because I know she does, and I saw she’s in the top 500. Also her rank jumped up quite a bit from last week. I will absolutely claim credit, because I read this book. And doing so made everyone so excited about her. I don’t blame them. 4 Platypires - Joood - Hooligan

Judy Greer is an American actress with an extremely wide range of films and television projects under her belt. She is probably best known by fans of Arrested Development as Kitty and in films such as 13 Going on 30 (in some countries Suddenly 30) as the awkward best friend of Jennifer Garner's character Jenna.Some of Judy's other film and Television credits include: 27 Dresses, 2 and a Half Men, How I Met Your Mother and Jeff who lives at Home. To fans of the show Archer, Judy is known for her voice role as Cheryl.Judy's most current film project is Kimberly Peirce's adaptation of Stephen King's Carrie as the kind gym teacher, Miss Desjardin who tries to stop Carrie's bullies.In July 2014, Judy will be seen as the chimpanzee Cornelia, the wife and queen of ape king Caesar played by her Suddenly 30 co-star Andy Serkis.Judy has two other projects coming out in 2015 including Tomorrowland and Disney/Pixar's The Good Dinosaur.
Just Another Girl and Her Books at 2:47 PM
Share