#SneakPeekSunday - Once and For All by Sarah Dessen 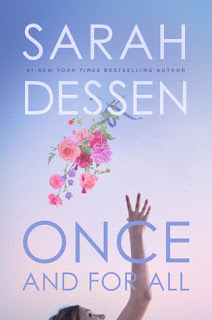 As bubbly as champagne and delectable as wedding cake, Once and for All, Sarah Dessen's thirteenth novel, is set in the world of wedding planning, where crises are routine. Louna, daughter of famed wedding planner Natalie Barrett, has seen every sort of wedding: on the beach, at historic mansions, in fancy hotels and clubs. Perhaps that's why she's cynical about happily-ever-after endings, especially since her own first love ended tragically. When Louna meets charming, happy-go-lucky serial dater Ambrose, she holds him at arm's length. But Ambrose isn't about to be discouraged, now that he's met the one girl he really wants. Sarah Dessen’s many, many fans will adore her latest, a richly satisfying, enormously entertaining story that has everything—humor, romance, and an ending both happy and imperfect, just like life itself.


I received a copy of this sneak peek from Viking Books through Netgalley. This is my honest review.

This sneak peek gave me a small taste into the life of the daughter of a wedding planner, who, surprise surprise, gets/has to work for her mother over the summer helping to plan weddings. This is a position that I can almost relate to, as I worked in my father's grocery store when I was growing up (starting in 5th grade), but it was my choice to start working there, and it doesn't seem like Louna got that same choice. However, once I started working for my father, I was the person who got called in to work when the flaky high school kids called out sick, because Dad knew I wasn't busy. So I can relate to Louna having to work just because Mom says so. Because Mom knows exactly what commitments Louna has. This helped to draw me into the story a little bit.

Now since this is only a three chapter sneak peek, I don't really have a very firm grasp of what is going on in the story at all. I am curious what role Ambrose will play, from the brief glimpse of him I got in Chapter Two, it seems that it will be significant.* I got a little bit giddy thinking about Louna and Ambrose dating over the summer while her mother is planning his sister's wedding. I would be interested in seeing how that plays out. I'm also very intrigued by a black dress and a pair of sandals that were mentioned in these early chapters. There's obviously a story there that I would like to hear.

Now that being said, would I buy this book on release day? No. I would not. Contemporary romance is rather low on my list of preferred reading material, and while I occasionally enjoy it, I basically never find myself just dying to read it. I would buy a used copy at my thrift store, or snag it for my Kindle on sale. I would be interested in reading the rest of the story, but not interested enough to pay full new release price for it myself.

*Yes, I realize the synopsis makes it clear that Ambrose plays a significant role in the story, but I didn't read the synopsis until after I wrote my review.

Sarah Dessen is the author of twelve previous novels, which include the New York Times bestsellers Saint Anything, The Moon and More, What Happened to Goodbye, Along for the Ride, Lock and Key, Just Listen, The Truth About Forever, and This Lullaby. Her first two books, That Summer and Someone Like You, were made into the movie How to Deal.  Dessen’s books are frequently chosen for the Teens’ Top Ten list and the list of Best Fiction for Young Adults. They have been translated into twenty-five languages. Sarah Dessen is the recipient of the 2017 Margaret A. Edwards Award from the Young Adult division of the American Library Association, recognizing her significant contribution to young adult literature.  Sarah Dessen graduated from the University of North Carolina at Chapel Hill with highest honors in creative writing. She lives in Chapel Hill with her husband, Jay, and their daughter, Sasha Clementine. Visit Sarah at sarahdessen.com.
Just Another Girl and Her Books at 11:21 AM
Share