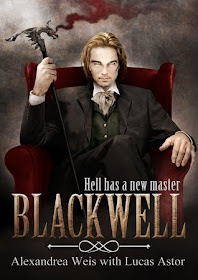 Hell has a new masterIn the late 1800s, handsome, wealthy New Englander, Magnus Blackwell, is the envy of all.When Magnus meets Jacob O’Conner—a Harvard student from the working class—an unlikely friendship is forged. But their close bond is soon challenged by a captivating woman; a woman Magnus wants, but Jacob gets.Devastated, Magnus seeks solace in a trip to New Orleans. After a chance meeting with Oscar Wilde, he becomes immersed in a world of depravity and brutality, inevitably becoming the inspiration for Dorian Gray. Armed with the forbidden magic of voodoo, he sets his sights on winning back the woman Jacob stole from him.Amid the trappings of Victorian society, two men, bent on revenge, will lay the foundation for a curse that will forever alter their destinies.


I was hired to proofread this book. The only aspects of the story that I influenced were the spelling and grammar. If you feel that my connection to the book makes my review untrustworthy, so be it, but this is my honest review.

I feel like this is the first book by Alexandrea Weis that I've read that wasn't set primarily in New Orleans. That was a bit weird for me. Fortunately I still got to spend a little time visiting with Magnus.

This was also one of my favorite Alexandrea Weis books, because I absolutely love historical fiction, I prefer it to contemporary fiction (which is what most of Ms. Weis' books are.) It's just such a treat to be transported back in time, especially when it feels like you're actually there, and that was definitely the case with Blackwell.

There were aspects of this story that made me tremendously sad, and those helped me to really understand the motivations of one of the men. I wanted revenge for him too, although I don't exactly agree with how he went about getting it. And the other man, well, I get his motivations too, but since they were rooted in pure jealousy, it's a bit harder to empathize with him.

Overall I give Blackwell 5 out of 5 stars. - Katie

Alexandrea Weis is an award-winning author of twenty novels, a screenwriter, ICU Nurse, and historian who was born and raised in the French Quarter of New Orleans. Having grown up in the motion picture industry as the daughter of a director, she learned to tell stories from a different perspective and began writing at the age of eight. Infusing the rich tapestry of her hometown into her novels, she believes that creating vivid characters makes a story moving and memorable.A permitted/certified wildlife rehabber with the Louisiana Wildlife and Fisheries, Weis rescues orphaned and injured animals. She resides with her husband and pets in New Orleans. Weis writes paranormal, suspense, thrillers, horror, crime fiction, and romance.Lucas Astor is from New York, has resided in Central America and the Middle East, and traveled through Europe. He lives a very private, virtually reclusive lifestyle, preferring to spend time with a close-knit group of friends than be in the spotlight.
He is an author and poet with a penchant for telling stories that delve into the dark side of the human psyche. He likes to explore the evil that exists, not just in the world, but right next door behind a smiling face.
Archery, photography, wine making, listening to jazz, blues, and classical music, and helping endangered species are some of his interests.
SaveSave
Just Another Girl and Her Books at 1:19 AM
Share